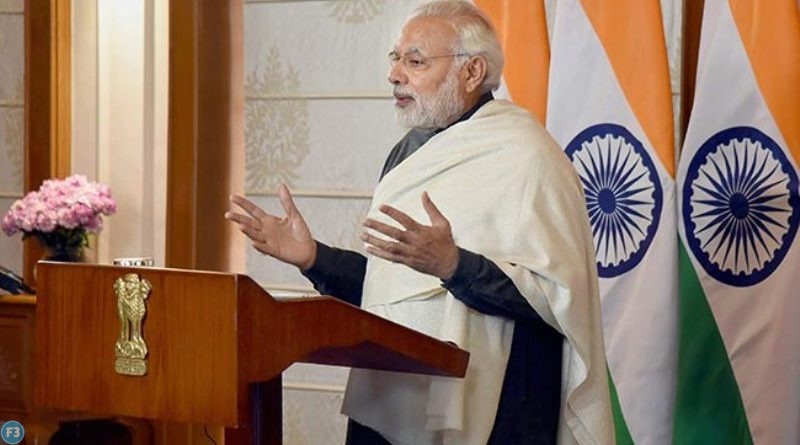 27 newspapers in 10 languages in 10 ASEAN countries have published the op-ed by the Prime Minister on the historic occasion of 69th Republic Day and ASEAN-India Commemorative Summit, External Affairs Ministry Spokesperson Raveesh Kumar said in a tweet.

SINGAPORE:  India and ASEAN have relations “free from contests and claims” and believe in sovereign equality of all nations irrespective of size, and support for free and open pathways of commerce and engagement, Prime Minister Narendra Modi said today.

27 newspapers in 10 languages in 10 ASEAN countries have published the op-ed by the Prime Minister on the historic occasion of 69th Republic Day and ASEAN-India Commemorative Summit, External Affairs Ministry Spokesperson Raveesh Kumar said in a tweet.

“We have a common vision for the future, built on a commitment to inclusion and integration, belief in sovereign equality of all nations irrespective of size, and support for free and open pathways of commerce and engagement,” he said.

PM Modi said that he had the privilege to host the ASEAN leaders for the commemorative summit to mark 25 years of ASEAN-India partnership.

It is a historic milestone in a remarkable journey that has brought India and ASEAN to a deepening partnership of great promise for their 1.9 billion people, about one-fourth of humankind, he said in the article.

Forged in peace and friendship, religion and culture, art and commerce, language and literature, these enduring links are now present in every facet of the magnificent diversity of India and South-east Asia, providing a unique envelope of comfort and familiarity between our people, he said.

More than two decades ago, India opened itself to the world with tectonic changes. And, with instincts honed over centuries of interaction, it turned naturally to the East.

Thus began a new journey of India’s reintegration with the East, the Prime Minister said.

“For India, most of our major partners and markets – from ASEAN to East Asia to North America – lie to the East. And south-east Asia and ASEAN, our neighbours by land and sea, have been the springboard of our Look East and, since the last three years, the Act East policy,” he said.

Along the way, from dialogue partners, ASEAN and India have become strategic partners, he said.

“We advance our broad-based partnership through 30 mechanisms. With each ASEAN member, we have growing diplomatic, economic and security partnership. We work together to keep our seas safe and secure. Our trade and investment flows have multiplied several times,” Modi said.

Over 20 percent of India’s outbound investments go to ASEAN. Led by Singapore, ASEAN is India’s leading source of investments.

India’s free trade agreements in the region are it’s oldest and among the most ambitious anywhere.

Air links have expanded rapidly and we are extending highways deep into continental South-east Asia with new urgency and priority. Growing connectivity has reinforced proximity.

It has also put India among the fastest-growing sources of tourism in South-east Asia.

“The over six-million-strong Indian diaspora in the region – rooted in diversity and steeped in dynamism – constitutes an extraordinary human bond between us,” the Prime Minister said.

Singapore is a window to the heritage of India’s ties to the region, the progress of the present and the potential of the future. Singapore was a bridge between India and ASEAN.

“Today, it is our gateway to the East, our leading economic partner and a major global strategic partner, which resonates in our membership in several regional and global forums. Singapore and India share a strategic partnership.

“Our political relations are infused with goodwill, warmth and trust. Now Our defence ties are among the strongest for both. Our economic partnership covers every area of priority for our two nations. Singapore is India’s leading destination and source of investments. Thousands of Indian companies are registered in Singapore,” he said.

16 Indian cities have over 240 direct flights every week to Singapore. Indians make up the third-largest group of tourists in Singapore.

“India and ASEAN are doing much more. Our partnership with ASEAN-led institutions like the East Asia Summit, ADMM+ (ASEAN Defence Ministers’ Meeting-Plus) and ARF (ASEAN Regional Forum) is advancing peace and stability in our region,” he said.

“India is also an eager participant in the Regional Comprehensive Economic Partnership agreement, seeking a comprehensive, balanced and fair agreement for all 16 participants. With every passing day, it is easier and smoother to do business in India. I hope that ASEAN nations, as our neighbours and friends, will be an integral part of New India’s transformation,” PM Modi added.