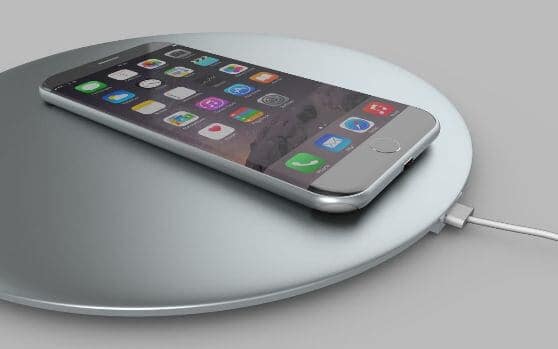 Mophie, maker of mobile phone battery packs, has introduced the only thing I’ve wanted to buy from them in quite some time: a wireless charging case.

Its new Mophie Charge Force case is a battery-free leather case that has a built-in Qi-compatible wireless charging receiver. You’ve probably seen wireless charging pads in places like IKEA or Starbucks, round inserts in tables or lamps on which you can place your phone to charge. Inside is an integrated Lightning (or USB-C) connector into which your iPhone 7 or Samsung Galaxy S8 slips. From the front it looks like a traditional battery case, but at 0.46 inches it’s as thin as your normal protective cover.

The case has magnetic points where Mophie’s Charge Force battery pack attaches, wirelessly charging your phone while adhering to it. You can also leave the battery pack on your desk and, since it supports pass-through charging, use it as a stationary charging point.

It’s a slick implementation of a long-awaited feature for iPhone owners. Samsung’s Galaxy S8 already supports Qi charging; the case is simply a magnet-holding device at that point.

Qi wireless charging has become the standard in IKEA furniture and Starbucks stores everywhere. So it sucks that Apple isn’t part of the wireless charging bandwagon. With its abandonment of the headphone jacks and traditional ports in favor of Lightning cables and USB-C ports, it’s only natural to assume the company would want to further rid the world of cables by making everything it can wireless, including charging the damn phone.

“But Patrick,” you’re wailing, “is it safe?” Well, beautiful commenter, I reached out to Mophie to find out how safe this thing really is, especially since Apple doesn’t exactly support the Qi wireless charging standard (even though it did join the Wireless Power Consortium earlier this year). My guess? I’m sure it’s fine. I doubt it’ll blow your phone up, but I’m always a little wary of unsanctioned charging methods.