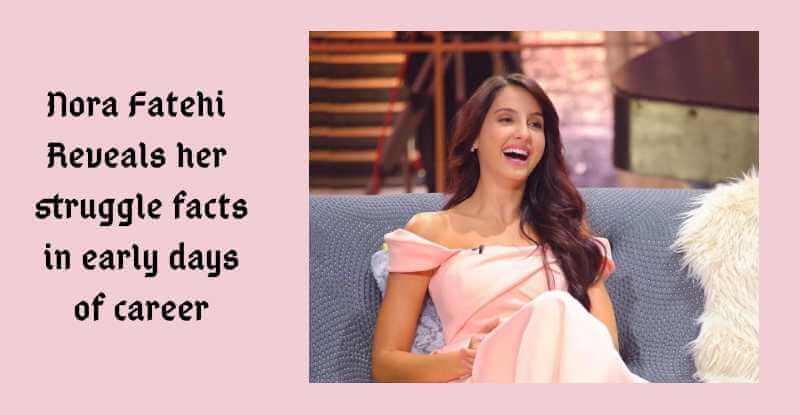 she comes from Moroccan Canadian family.

she gained major Recognition after she was featured in the song Dilber and Germi commendable dance move and acting skill.

According to a news website, there is a race going on between Nora Fatehi and Malaika Arora for who is the best item song’s dancer.

And Also Nora Fatehi has transformed her hair giving a challenge to Kangna Ranaut.

The gorgeous Nora Fatehi Dilbar Girl revealed some interesting facts about her early life on chat show that she had to start working at the age of 16 due to financial constraints in her family.

and also spoke about how she used to run her family at an early age The actress-dancer had appeared on Komal Nahta’s chat show Starry Nights Gen Y.

She shared, “My first-ever job was as a retail sales associate in a mall which was right next to my high school so I would finish my classes and go there. I was 16.

I had to work for many reasons. There were a lot of financial issues in my family and I was supposed to be the one that would step up and be the breadwinner.”

Nora appeared in many Hindi films. She began her career with a Bollywood film Roar: Tigers of the Sundarbans. Nora Fatehi also did some Malayalam and Telugu films.

But before her big break, the actress shared that she did odd jobs to sustain. “I was working in a men’s clothing store so I was selling suits, putting outfits together and all that.

After that, I did numerous things. I worked as a waitress in restaurants, bars and shawarma places.

I worked in a telemarketing office, cold calling people and selling lottery tickets.

‘Hi, ma’am, do you want to buy this ticket?’ and 90 per cent of the time, they were like (imitates sound of phone hanging up). I worked on commission, I worked in McDonalds once. I did everything,”she said.

Her mother is 3rd generation Punjabi and therefore Nora is indo-Arab and can speak Hindi, French and Arabic.she is collage dropped out from York University , toronto canada.